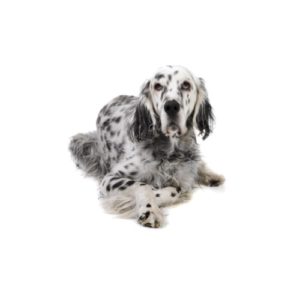 A graceful, elegant gundog, the English Setter today excels in the show, obedience, and agility rings as well as in the field.

Although similar in function to the Irish and Gordon Setters, the English is a distinct breed, differing personality, and appearance. Their beautiful feathered coat is white with an intermingling of darker hairs resulting in markings called “Belton.” Belton markings can be orange, blue (white with black markings), tricolor (blue Belton with tan points), lemon, and liver.

One of the oldest gundog breeds, the English Setter was developed in England more than 400 years ago. Believed to have developed from Spaniel stock, the breed was originally called a Setting Spaniel. Before the use of firearms, this “Setting Spaniel” would find the birds and then crouch down on its front legs or “set” to allow the hunter to throw a net over the game. When guns became widely used, a more upright pointing stance was bred into the Setter so he could be more easily seen.

This gentle, affectionate family dog loves to be with its people and does not thrive when isolated in a yard or kennel. Athletic and energetic, they also require daily vigorous exercise either on a leash or in a fenced area. Their beautiful, feathered coat requires regular maintenance, including brushing and clipping.