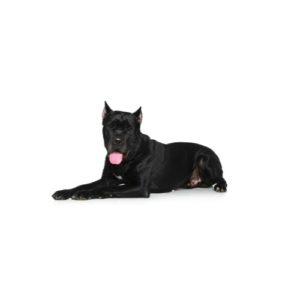 Noble, majestic, and powerful in presence, the Cane Corso is a muscular and large-boned breed. One of two native Italian “mastiff type” dogs that descended from the Roman canis Pugnaces, the breed's name derives from the Latin “Cohors” which means “Guardian” and “Protector.”

The breed's coat is short but not smooth (like the coat of a cow), very coarse and thick in order to be perfectly waterproof. It can be black, gray, fawn, or red, with brindle variations and a black or gray mask also acceptable. Make no mistake: This is a whole lot of dog, both physically and temperamentally. They're smart, trainable, eager to please, versatile, and docile, and intensely loyal with their humans, especially children.

The Cane Corso is a native of Italy, where they played watchdog and hunted wild boar. Prior to 1988, the Cane Corso was known only in southern Italy, and was considered very rare, but has still been featured in many paintings throughout Italy's history.

The Cane Corso is easily trained because of its extreme intelligence. As a large and athletic breed, they need a lot of exercise. They are affectionate to their owner and bond closely with children and family. Cane Corsos are light shedders, which make grooming simple all they need is an occasional brushing.